I used to be more Danish than half of my genes actually call for.

That included all the modesty, the charms, offs and quirks that came with being part of a populace barely big enough to form two teams to play sports.

The high degree of extrovert tolerance and integrity of yonder times is far gone and the above is my testimonial.

This work of art consists of three homogeneous objects, identical in appearance and constructed in the same material and to the same dimensions. The objects share a footprint of 0,4356 m2 (66 x 66 cm.
26′ x 26´= 4.6888 ft2). The base and cap of each are of a chalk-white semi-gloss acrylic polymer composite2. The top half of each object is constructed of bullet-resistant untinted glass. The caps all conceal 4 LED light fixtures3 illuminating the interior of each display box with a strong bright white light. This will be the only light available in the otherwise darkened exhibition room. They will be placed in immediate proximity to each other, the distance between them equal to one-eighth of the longest dimension of the exhibition space. Each base will have one side containing an interface from which spectators can operate and/or interact with the object. This side must face north regardless of the general layout of the room. No sound will emit from the boxes except for those mechanically generated or as otherwise indicated herein. There will be no signage other than the bare minimum required to work the interfaces. The exhibition space itself must at all time be climate controlled and adjusted to exactly match the temperature and humidity as recorded by the weather station at Kastrup, Copenhagen4. The equipment used to maintain the environment must be able to keep olfactory conditions absolutely neutral. 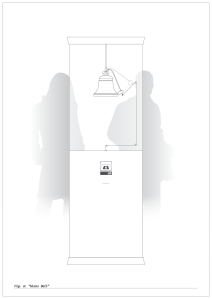 Made and cut from crystal lead glass5, transparent with no trace of color, hanging at eye-height, appx 185 cm or 6′, from the cap inside the box. An aluminum arm is attached via a pulley to the bell. It holds a hammerhead at the far end, cut from Danish granite of the type “Hellets Granit”6, polished to a semi-gloss. A thin metal wire running over a series of pulleys activates the hammer. The wire exits through an aperture placed at absolute center in the bottom of the display box.

On the side of the base facing north and at waist height, no more than 100 cm or 42′ above ground, a single-fingerprint scanner is installed just above a white-on-black 6-digit liquid crystal display counter7. The scanner and its electronics are set to operate the wire system: for each 3 identical right hand index fingerprints read, it lifts the hammer a millionth of a fraction of its full pendulum (see fig. 1). Each identical fingerprint can only be read these 3 times and must be scanned with at least a 3-day interval between scans. The scanner accepts only right hand index fingers; attempts at using any other fingers will not be read. Each successful read will prompt an electronically generated four note chime (F#maj78and the third and concluding scan will prompt the box to print a receipt, which will be signed by the artist upon request. At the millionth registered and confirmed set of prints, the box will cut the wire causing the hammer to fall and smash the Bell.

The deconstructed Bell will be replaced with a new and identical Bell constructed and installed as the original and thereby starts a new cycle. This cycle cannot end. The remaining shards of the smashed Bells will remain in the box.

This box contains a small transparent umbrella made of heavy clear vinyl9 mounted on the bottom of the display box. On the day of the exhibit opening, the umbrella will be at a fully folded stage. The umbrella unfolds as does a normal umbrella by extending springs and ribs within its construction, albeit its operation is linked to close interaction with the mechanical, and computer system contained in the base of the box and controlled by the interface mounted on the side.

The interface is similar to that of an automated telling machine: it accepts all known international credit and debit cards, adhering to all legalities concerned. Through this payment device, spectators can unfold the umbrella by buying any number of increments of extensions, at the rate of DKK10 1,00 = 1 millionth of an extension. At the time the audience has deposited exactly 1 million DKK in to the account linked to the payment device, the umbrella will be fully extended. Spectators will be prompted with the typical requirements of entering Personal Identification Numbers, desired amount and currency. A thermal print receipt will be the approved document for the transaction and will be signed by the artist upon request.

Once full extension of the umbrella has been reached, it will collapse to its original state and start a new cycle of unfolding. The funds generated will be transferred to the business account of the exhibition museum and can only be used to procure a new piece of art to be made by the Artist. Any revenue generated through interests that exceed DKK 999.999,00 may only be used to supplement the maintenance of the art herein specified. All legal information including the full text of the Contract will be printed on the back of each receipt that is generated by the artwork.

Mounted inside the display box at a height equal to the Umbrella and the Bell sits a standard professional Surveillance Camera11. It is fitted to a motor capable of moving as close to 360˚ as possible. The high-def lens of the camera is at all times pointed towards the room outside the box in order to register all movement in close proximity to the box. The general motion of the camera follows a random search pattern based on an algorithm simulating the flight of the common housefly12.

When the camera and its built-in system registers a person moving into its field of view, it will stop its search pattern and lock on to the face of the spectator for appx. 30 seconds in order to register the color of the spectator’s skin. If this color-value is determined by the camera and computer to be more than 15 on the von Luschan scale13 the LCD counter will add the determined von Luschan scale-points to its count. If the spectator moves before the value of the skin color is established by the system, the camera will abort its scan and continue its search pattern. At every successful count a receipt will be printed. These receipts will contain information showing instructions on how to request an official apology for any personal discomfort the spectator may have experienced. The Artist will then sign this receipt.

what triggered revisiting undemanding snowy childhood holidays of solitary peace tiptoeing through sleepy lucid luminous rooms alone in soaring fantasies of innocent stories scenes songs (little knowing what desires they would later feed or lead to) subverting my days of dreams high and free free free free forever six, empty disregard of the inevitable return of the looming ritualistic lockdown-days ahead, with growing detest of incomprehensible dogma, is this. insight: this search never stops.

Spot on, again. On behalf on some of my fellow danes I hereby extend an apology to AJ. But some of these things go really deep, even in harmonic, educated and tolerant danes. We are a tribe more than a people I guess. Due to my being half-german, or rather danish-ethnic german, I am often asked by american friends how the people of germany allowed the nazis to gain power. My answer is simply for them to have a look at contemporary denmark; how the culture of bigotry trickles down (just to borrow a Reagan phrase) from the speakers chair of parliament to firtsgraders in school. It is disgusting and to my eyes extremely dangerous and it takes a friendly foreigner to call it. To actually see that the emperor is naked. So thank you and allow me to reblog. Would love to hear your view on our state-church and its close affiliation with schooling, government, constitution and monarchy. On that note I’d wish kids were taught “democracy” and not “christianity”

I am totally integrated now though this is probably not what the Danish authorities meant. Søren "effing" Pind would probably shake his comedy head and say with his comedy voice "No, I did not mean like that… but… she's white, right? Ahh, doesn't matter then. She can do what she wants, ikke også?" If integration is about paying tax and going to work, I have been integrated since my first … Read More

via Adventures and Japes

There was an error retrieving images from Instagram. An attempt will be remade in a few minutes.

Condensation is occurring upon condensation nuclei as the parcel lifts, cools adiabatically and becomes saturated.